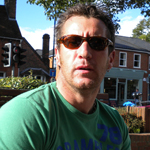 Life was good for Andy Trollope, running his own business Brunel Motors and enjoying a successful career as as professional moto x racer.

Although it was hard juggling a full time job and competing at the highest level he thrived on the satisfaction sustained from leading a very busy and active life. On the 27th of July 2008 that all changed while competing at a British championship race meeting Andy had a very slow speed crash which changed his life for ever.

He broke his back and damaged his spinal cord leaving Andy a T5 paraplegic, which basically means that he was left paralysed from the chest down with no feeling or movement below the chest.

Andy says that very early in his rehab he was told by his case manager that there were two options to deal with his injury: give up and sit around doing nothing or grasp life and live it to the full. This may sound harsh but Andy says this was the best advice ever given to him.

He worked hard during his rehab at Stoke Mandeville Spinal Unit and was discharged four months later. A month after discharge Andy was easing his way back into work and exploring the many sporting options available to a full time wheel chair user. After trying virtually every sport out there he was struggling to find anything that gave him the exhilaration he found from moto x. That was until a year after his accident he went on a skiing trip and learnt how to mono ski.

He now takes yearly trips to the USA to compete, teach and enjoy the freedom being able to free ski unaided. It was through skiing that Andy found out about adapted water skiing. Between these two sports Andy at last had now found two sports that gave him the adrenalin rush that he so desperately craved.

Andy is now a fully qualified water ski instructor. He regularly teaches people with many different disabilities from spinal cord injuries, visual impairment and learning difficulties which Andy says he finds just as rewarding if not more so than skiing for himself.

Andy is now back at work full time working as both a mechanic and continuing with the day to day running of Brunel Motors. He became involved with Enhance the UK after a chance meeting with the founder of Enhance Jennie Williams at the mobility road show in 2011 when she asked him to fill out a questionnaire about the difficulties of forming relationships and dating from a wheelchair users perspective.

This was the first time Andy had heard of anyone trying to approach and help people with the sometimes daunting prospect of dating and forming relationships for people with disabilities and was immediately impressed with the concept. After keeping in touch with Jennie and finding out about all the other ways Enhance was trying to break down the barriers educate people about many different disabilities, not just in dating but in everyday life, he was very keen to get involved in anyway that he could help.

In 2012 Andy was made a Trustee of Enhance and is very passionate about the need to spread the word about the great work that Enhance are doing. In his own words Andy said, “I believe that the need for education and advice that Enhance The UK can offer people with or with out a disability is invaluable and as a fultime wheel chair user i think that i can offer another perspective to help get this message out there.”