By Enhance the UKApril 25, 2016Disability, Lifestyle

I have been a bit stumped this week as to what to write my blog about. As usual, I’ve been trawling Twitter and other news sites for disability related stories to comment upon but quite frankly all that I could find was article after article about how our beloved Government are delivering more and more cuts to disability provision.  While I continue to believe this is terrible, I really do not know what else to say about the situation that I haven’t stated before in other blogs. To be honest, sometimes I get a little fed up with writing about disability issues all the time. I wouldn’t mind so much if now and again I could come across something that raised a different aspect or point of view but it just seems to be a constant barrage of information about how David Cameron and his cronies are putting the squeeze on us. It wouldn’t have to be a positive story even, I would settle for one where some other section of society apart from the Government and Capita were having a pop at us. At least it would give me someone different to slag off. So I am going to apologise in advance if this week’s piece is a bit rough and scrappy as I haven’t really felt that inspired by anything that I’ve read.

Only one story did pique my attention this week. It appeared in the Daily Mail yesterday and told of  mother, Emma Symonds who is allowing her five-year-old son Logan to where girls’ clothes to school because the child identifies as a female. While I can see this as progressive in some ways and am all for the rights of transgendered people I do question whether a child as young as five can really make decisions on something as big as what sex they want to be. There seems to be a fashion these days where more and more parents are identifying their children as transgendered just because they claim they want to be a ‘boy’ or a ‘girl’. While I am sure there are many among these ‘mermaid’ children as they are known who will grow up truly believing they were born in the wrong body, I do fear that some parents will be anxious to use this as an explanation as to why their little ones don’t conform to the expected behaviour and dress of their sex.

There have always been boys who like playing with dolls and dressing up and girls who have been more interested in sports and cars. Now we are a lot more accepting of this which is a admirable thing, everyone should be able to express themselves how they wish. I just wonder whether those children who express such a preference will be too quickly catagorised as trans and therefore be given a label that they might not identify with as they grow. If you put a little girl in trousers, no-one makes a comment, but a little boy wanting to wear a dress is somehow an issue. The Daily Mail runs the piece beneath the headline ‘The twin brother who’s being brought up as a sister’ but that is simply not the case. Miss Symonds states that she’s simply allowing her son to dress in a way that makes him feel comfortable and happy, she still uses the terms ‘he’ and son and says she will happily seek further advise when he is old. Yet the Daily Mail already has decided that wearing feminine clothes must make him a girl or what to be one. But this may not necessarily be the case. Individuals like Eddie Izzard have proved that the type of clothing you choose to wear doesn’t necessarily define your gender or sexuality. Perhaps I have a peculiar view on life but I’ve never really understood why people put such an onus on gender and what is appropriate for what sex anyway. Personally I think there is enough pressure on kids without adults trying to define their sexual orientation at such an early age. Anyway, I find it hard to believe that a child of four has the mental capacity to know exactly what they want to be for the rest of their lives. When I was four, I hadn’t learnt to walk yet and spent my times crawling so decided that I was going to put my Dad’s slippers on my hands and live as a dog! Which reminds me that nearly every photo we have of my Dad up till the age of eight shows him at some fete or party wearing a dress. Admittedly , it wasn’t his choice (he claims)  and the occasions did require fancy dress but it just proves that what you are like as a kid might not be a permanent thing. Thankfully I have never seen Dad revert to childhood and hope I never do. I’m not unsupportive, he just has terribly, skinny legs!

Like I say, this week I haven’t really found fodder for my blog this week, hence the strange diversion into cross-dressing. A small item did niggle at my disability radar.  Cadbury’s have changed the wrappers of their Roses’ chocolates from the traditional twisty kind to the new fangled sealed variety. They claim it’s to stop contamination but for me, and I am sure a lot of other people who have difficulties using their hands, it has made it a lot more tricky to enjoy a choccie treat. I find it a piece of cake, well a bit of chocolate to just grab the ends of the old wrappers between my fingertips or teeth and pull but the new design takes a lot more skill and is bound to end up with a smushed Golden Barrel or Strawberry Dream all over my hands. I know it doesn’t sound like a big deal and it’s not. It’s just one little piece of independence that I have lost. It felt the same when the did it with the Caramel bars. Also I can’t help feeling they are overplaying the safety aspect of thee whole matter a bit as Roses come in a sealed box or tin and are usually shared by friends or family. 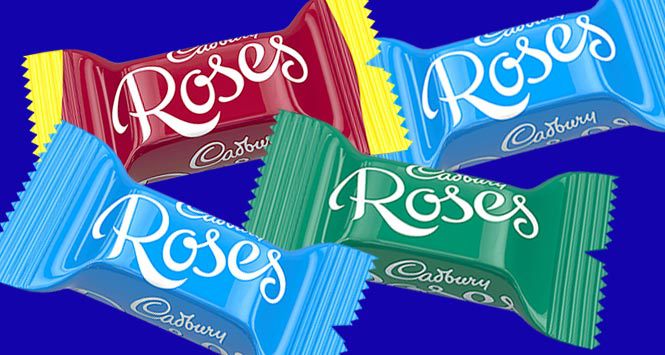 The big news this week has, of coarse, been the 90th birthday of the Queen. I’m pretty indifferent to the monarchy myself. My mum would quite happily roll out the guillotine on the lot of them but I think the old girl hasn’t done a bad job as head of state considering her kids and grandkids have been a bit of a nightmare. I did feel a bit sorry for her this week however. I know it’s had to know what to get a 90 monarch on their special day but some of the celebrations have been a bit, well, odd. First she has her official photo takien halfway up the steps of Windsor Castle which looked like the photographer just wanted to prove she could still get upstairs unaided (talk about rubbing itin that you’re getting on). Next the winner of Bake Off presents her with a wonky purple cake that seemed to have nothing to do with Britain, the Queen or turning 90. Then some elderly bloke up the road in Windsor decides to celebrate his love of the royal family by putting this in his front garden. Scary! 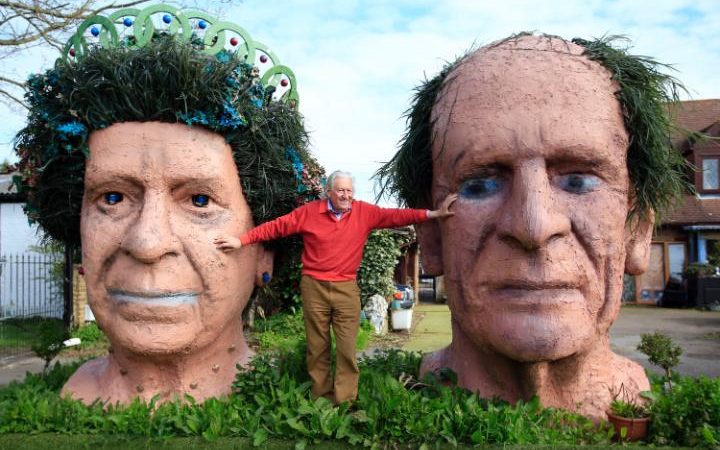 According to the Telegraph, 83-year-old Ben Bennet even believes Her Maj has dropped by to see his creations herself because he has seen a number of Range Rovers driving by his house. I have news for Mr. Bennet, I don’t think that’s the good lady herself but it might very well be her security team. I don’t have blue blood but it’s my birthday next week and if any of my neighbours start to erect terracotta effigies of me with privet plaits, I’m moving!