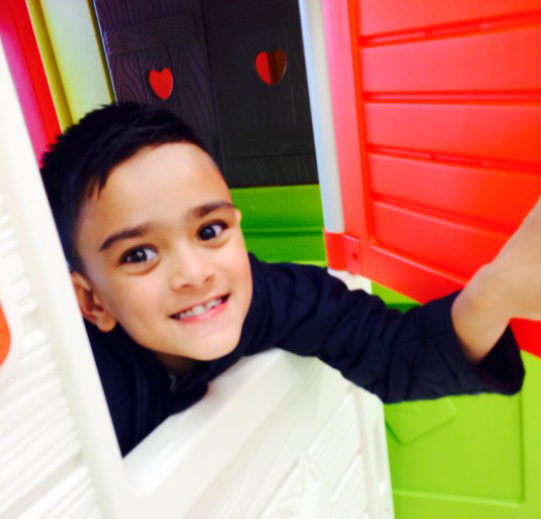 My son Lateef was born 12 weeks early weighing just 2 lb 8 ozs. He spent the first two months of his life in the neonatal unit. Lateef passed the initial screening test before we went home. It wasn’t long after being home that I realised that Lateef wasn’t responding to sound. He only reacted to toys with lights and never responded to the door slamming or sounds like that. I was so worried that one night I hammered a saucepan with a spoon right beside his cot. He didn’t respond at all. It was then I knew for certain that there was something not right with his hearing.

It was at this point my fight to get a diagnosis and to the root of the difficulty started. I telephoned the hospital and asked for an Auditory Brainstem Response (ABR) Test. This tests the brain’s response to sound. I had been doing my homework by this point and knew that this was the next test that needed to be done. I was refused this test as Lateef had passed the newborn screening test. I took him to the doctors several times but was simply ignored. A nurse even said to me that she understood that he was my first born and that I was bound to worry more. I was really upset and at my wits end as I simply didn’t know what to do. It wasn’t until I moved house and saw a different doctor that I was finally taken seriously and Lateef was referred for further testing.

Lateef had the ABR test when he was about 12 months old. I was told there and then that he was profoundly deaf. I literally didn’t know what to do with myself. I was at the hospital by myself and devastated. I felt numb. When asking what was next I was simply told a letter would be sent. I was not offered anyone to talk to or given any information. I left the hospital in a daze. I walked in the wrong direction for over an hour before I realised I lived in the opposite direction! When I finally got home I called my mum and that’s when I started to cry. I remember saying that he would never be able to tell me he loved me. I literally didn’t know what to expect or who to turn to. I had so many questions, for example how would he ever communicate? What would his future look like? I had only ever met one deaf person before who always communicated by writing things down.

The journey to a full diagnosis was far from over and incredibly rocky because Lateef’s ear was working ok but his brain wasn’t responding to the sounds. He was eventually referred to see a specialist at Great Ormond Street Hospital and had to undergo lots of different tests often under general anaesthetic. This was a very scary and stressful time for us. Lateef was fitted with hearing aids but hated them and refused to keep them in. In fact the amplified sound was too loud and damaged his cochlear. His behaviour was terrible at this time. He was very aggressive and would throw terrible tantrums. He had no real communication method and was so frustrated. Lateef couldn’t communicate with others at nursery so didn’t make friends and people I knew simply didn’t understand our situation. They would be very sympathetic but this wasn’t what I wanted. I wanted Lateef to be treated normally but with understanding.

It took until Lateef was three and a half for him to be diagnosed with Auditory Neuropathy Spectrum Disorder. As explained before this means that the cochlear was working ok but the hearing nerve itself wasn’t processing the noise correctly. This means that Lateef’s hearing was literally cutting in and out, at times he could hear and other times he couldn’t. To be honest by this point I was simply relieved to have a diagnosis.

It wasn’t until we had a diagnosis that I received any kind of support or advice or input from a Teacher of the Deaf. It was then that I started to learn basic sign language to help Lateef communicate. I decided that Lateef should have a cochlear implant (a surgically implanted electronic device which gives a sense of sound). This was not an easy decision to make but one in which I felt was for the best. Since his implant, Lateef’s language has come along leaps and bounds. In fact one of the first things he said to me was that he loved me, which was really emotional. He loves wearing his implant and has always kept it on. I also noticed a change in his behaviour for the better almost straight away. We didn’t meet any other deaf children until he started school. It was through meeting other parents and also my local deaf children’s society that I have met other parents and people who fully understand and are able to provide me with advice and support. More importantly Lateef has met other children who are deaf like him.

My view of Lateef’s deafness has changed over the years. I am incredibly proud of my son for who he is and wouldn’t change him for the world. His deafness has opened up a whole new life for us that I simply didn’t know existed. I feel very positive about the future and know that will achieve what he wants in life. My advice to parents is that you know your child best. Always trust your instincts regardless of what you are lead to believe. I also recommend anyone that has a child who has been newly diagnosed as deaf to research local groups and support as it really does make such a difference.