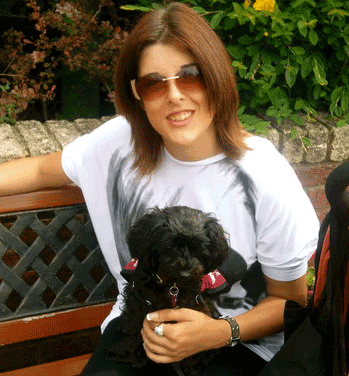 God Will Heal me? by Claire Holland

I hardly ever write about my own experiences around being Deaf mainly because having read so many fantastic blogs on the topic I find that I have little to add to the subject which hasn’t already been written about before. But today’s different for me as I want to share an experience I had this week and I hope that by writing this blog it will help me reflect upon how I actually feel about it. You see, I simply don’t know how to feel. One moment I am angry, then I feel pity towards the other person involved, then I feel a sense of disappointment swiftly followed by thinking that I simply shouldn’t allow myself to feel anything about it at all. But this is easier said than done.

What could happen which could cause so much turmoil I hear you ask? Really, it wasn’t anything major, just a chance conversation with a woman outside a shop in London. I was rushing around trying to buy my Secret Santa, stressed because I had forgotten it and needed it before I arrived at work when I practically bumped into a lady. She muttered something which I simply didn’t catch so I explained that I hadn’t heard what she had said and that I am Deaf. Straight away she put her arms out to embrace me, rubbing my arms softly and clearly said. “Oh, you must have been bad in a past life, don’t worry if you are good in this life, God will heal you!”

Wow … I would like to say that I said something to register my discomfort or disagreement with her but I didn’t. I simply stood in shock before walking away. I thought about this conversation and my reaction the whole way to work and am still pondering it now. You see, the comment was not made from a bad place; the lady was clearly trying to be kind. And yet I find it one of the most offensive things that has ever been said to me.

Whilst reflecting on my response to this in bed that evening, a memory popped into my head. I must have been about 9 and was reading my children’s bible. I read about the story about Jesus putting mud on a blind man’s eyes and telling him to go to Siloam and wash and the man was healed and was able to see. I vividly remember thinking ‘why can’t I be healed?’ You need to bear in mind that I was at a time in my life where I was unable to see any of the positives of being deaf and had not formed a positive self-image yet. I used to think that if I had a genie and 3 wishes, my first would be to be able to hear. As I grew up, I realised that my deafness has shaped my experiences and has been integral in making me who I am. It is central to my identity and something which I would never want to change or deny as by doing that, I believe that I would be changing my essence.

During Religious Education classes during my teens I struggled with the idea of healing. I couldn’t understand why Jesus would want to heal people and believed that this was implying that people with disabilities were not perfect as they are. Now I am older I can see that there can be a difference between healing and curing and that this is not an area which is black or white. I can also understand why some people themselves may want to be healed or want their loved ones to be healed.

The idea that I must have been bad in a past life implies that my deafness is a punishment for a sin which personally, I find abhorrent. I googled this before writing my blog and from what I can see the bible appears to be inconsistent on this (although I am the first to acknowledge that I don’t have any deep understanding of the bible as I am not religious). I believe myself that like all religious books there is an element of being open to interpretation and on the whole this is a powerful and positive thing. I have focused on Christianity during this blog simply because this is what I grew up with.

I suppose the conclusion I can come to is that religion is a deeply personal belief and that everyone is entitled to their own beliefs. Who am I to tell the lady her belief’s towards what she sees as my disability is wrong? On the other hand who is she to make assumptions about me? Writing this blog has helped to alleviate my anger. I believe her response towards me was made from simple ignorance. She was unaware of how insensitive she was being. Wouldn’t the world be a better place if we all had a bit more awareness? Which in itself is the reason that I am so passionate about the work we do at Enhance the UK?

“What can I try to do to help my pain in the bedroom and make sure my partner stays happy?”

By Jen | Lifestyle, Mik Scarlet, The Love Lounge | No Comments
“My chronic pain has never been properly diagnosed and i the last few years I have been unable to work because of it. My partner and I have been together for over ten years and had a really strong intimate relationship… until recently. I’ve been unable to enjoy any touch because of my pain recently and I find it hard to get in positions. My partner is understanding but I don’t want him to get frustrated as we are still young people in our early thirties. What can I try to do to help my pain in the bedroom and make sure my partner stays happy?” – Tina, Milton Keynes
Oh boy Tina, do I know how you feel. I also have had chronic pain for most of my adult life (I wrote about it on the Huffington Post recently) and also know how much it can prevent you from feeling sexy, or allow you to enjoy being touched. I can’t tell you any magic bullet, but I would advise you try Mindfulness. My GP sent me to a therapist who trained me in the Mindfulness technique specifically designed to help with chronic pain and it has changed my life. It gives you the ability to cope much better and puts you in charge of the pain.
Before I found the technique, I used to try to build up to sex slowly and this way I found I could get in the mood far easier. Another method might be role play. If you are really in the mood as you are living out a fantasy, pain is much easier to ignore. You might think that you have to do more to make it work, but I would advised you to ask your partner to take charge more, try stuff out and always keep checking that you are OK. That way as you get more intimate, he’s exploring you while you’re in control and both of you feel conformable. That in itself can be a bit of fantasy eh? Pain is a bugger to live with, but trust me you can find a way through and nothing gets rid of pain like a really nice orgasm. Sure not for long, but if you keep them coming then it’s the best pain medication ever. – Mik
0

“I am severely visually impaired but I am so able that many people don’t realise how bad my sight really is.”

“I am severely visually impaired but I am so able that many people don’t realise how bad my sight really is. I’m single and readily dating but I am also quite shy until I really know a person. Because of my sight I highly prioritise touch when becoming intimate with someone. How do I bring this up with someone new without looking like a creep?” – Abby, York

I would always take the honest approach Abby. I think you might find people have no worries about you preferring touch. It actually sounds rather sexy. I would just tell them you are visually impaired, and that means touch is what turns you on and see where it goes. Don’t let your worries about how people might react prevent you from finding out how they WILL react. Also if someone does react negatively then you’ve been saved from wasting time on someone obviously not right for you, so you win either way.
0

“I’m worried I won’t look as smooth rolling around on the dancefloor!”

By Jen | Lifestyle, Mik Scarlet, The Love Lounge | No Comments

“I was involved in an accident and after a long road of recovery I am now adjusting to life as a wheelchair user. So far, mostly, so good but I do have some worries about the practicalities of my new piece of kit​!

Before the accident I loved nothing more than hitting bars and meeting new people. I’m worried I won’t look as smooth rolling around on the dancefloor!” – Tim, Crawley

Hi Tim. To be honest I found myself looking far cooler once I started dancing in a wheelchair than I ever did on wheels. I have been known to take over a dance floor with my moves, and once even podium danced as a massive rave. I can see no reason why you couldn’t either. That’s not to say that getting back out once you start using a chairs is a bed of roses.
There are always the annoying issues of access, especially the thorny issue of accessible loos when you have had a few, but once you start hitting the nightlife you will find those local haunts that are OK and this becomes a regular. I found that going to a pub or club a lot gave you a chance to explain to the management how they could improve their access even more too.
If I’m honest, I had similar worries when I started my life on wheels, way back in the 1980s, but I soon found the call of a good time out weighed any fears I had. I also discovered that if you “accidentally” clip the foot of someone you fancy with your front caster you have a perfect in, and the offer of a drink to say sorry is rarely refused. Don’t crush their foot as this will never work, but a gentle nudge never failed me. Get out there and see what happens.