A message to all parents of babies with a stoma

By Enhance the UK Disability No Comments 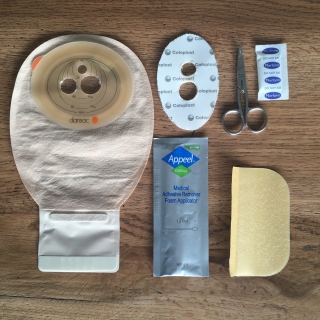 I never thought I would go through the trauma of having a baby in intensive care, let alone him having major surgery at 2 days old. Our little boy Felix had been born without an anus (Imperforate Anus) and quite frankly, having never realised that could be a possibility, we thought that his outlook was bleak. However, we were told he would have surgery to create a stoma and if successful, would be able to live a (relatively) normal life. Having no idea what a stoma was, we learnt it would be an external opening of his bowel onto the abdominal wall where his output (poo) would then leave his body into a collection pouch (colostomy bag). **insert wide-eyed emoji here**

I can tell you that there were a hell of a lot of things to get our heads around and a lot of tears in the process. While all the other mums I knew from prenatal classes were snuggling with their newborns in bed and breastfeeding, we were staring at Felix through plastic into his little incubator, hooked up to lots of monitors, on drips, unable to even give him a cuddle, wondering if we would be able to cope with seeing his insides stitched to his outsides!

But after his surgery and a week to get some of his strength back, we were able to have a few cuddles and start to learn how to change his colostomy bag. We had a crash course in stoma products from our stoma nurse and was told that unfortunately “there’s not one size fits all” and “it’s whatever works for you”. Well, I can tell you, in those first weeks, nothing was working for us. Felix had raw, excoriated skin and the bags wouldn’t stick or stay on at all. We felt completely hopeless when, at every bag change, Felix would scream in discomfort and the products we were using didn’t seem fit for purpose. The adhesive remover wipes would dry out in a second before you could get the bit of the bag off that hadn’t peeled away already, the bags themselves had to be adult in size due to the placement of the two stoma holes and so took up the whole of his tummy, and none of the adhesive wipes/sprays/pastes were doing anything to keep the bag on.

As a parent you feel horrific as you’re causing your child pain by not being able to figure out what to do; you feel so torn, on one hand, you want to crawl into a small dark hole and cry for eternity, and on the other, fight and research like crazy until you figure out a solution. We did the former for about five minutes until we snapped out of it and jumped onto Google to see if anyone was experiencing the same thing.  Amazingly, people were coming up against the same problems, and even more amazingly, people were solving them! We went from feeling very lonely to realising that although we were on a different parenting path to most, there were so many families in the same situation and struggling with the same things as we were. The gamechanger was unbelievably a hairdryer of all things!  These are my tips for any parents that are going through the trauma of getting a colostomy bag to stay on your child, or for that matter yourself if you have a stoma…

In terms of removing the bags, try and get hold of the Appeel Adhesive Remover Foam Applicators rather than the wipes as the wipes just dry out in seconds, failing that, use a cotton bud in conjunction with the Appeel Adhesive Remover Spray. Buy a good pair of curved nail scissors, this will help to cut the holes for the bags rather than trying to use straight blades. On colostomy bags, the sticky adhesive just isn’t quite sticky enough for a young baby that likes to wriggle! Using a hairdryer to heat it up enough to become stickier was the first tip we learnt (obviously not too hot that it would burn their skin) If you’re in hospital and can’t find a hairdryer, a hot lightbulb comes a close second. There are stoma powders/pastes/putty-like barriers to fit around the stoma, but none of these really worked for us. We found layering sprays of the 3M protective barrier solution with a few seconds in between each one made the surface more adhesive, and because it also protected the skin, it was really all we felt we needed. If you find things are still not sticking and you’ve got a situation of a healing wound from the surgery or very excoriated skin, try using something called Coloplast Protective Sheet. I had never seen the protective sheet used on a stoma before and never seen anyone write about using it on stomas online, but honestly it’s the stuff stoma miracles are made of!

We came across the protective sheeting when Felix had his second stoma created (yep, that’s right! second one)!  Felix had a stoma reversal when he was just over a year old but it didn’t unfortunately quite go to plan. After we came home from the hospital, he got a leak internally and developed sepsis. We had a dangerously sick boy and he had to be rushed into hospital for surgery to save his life. The surgeons had to create a new stoma further up in the bowel, which meant a whole new opening and wound to get used to and a month in the hospital again trying to figure out how to get the bags to stick as our previous method just wasn’t cutting it.

We were so proud of the fact that with his stoma the first time around, the skin never broke down after we got him home and it looked in great condition, this time around, it broke down within days and we were left scratching our heads as to what to do. It turned out the stoma nurses had just been doing some training on a new product for open wounds called Coloplast Protective Sheet. This worked so well on Felix’s very damaged skin.  This time, we only used a little stoma powder in the parts where his wound had opened up from the surgery and then cut a circular shape from the protective sheet around the stoma with holes to fit it through snugly, stuck it down and then heated up the bag and popped it on top. It had about a 99% success rate and totally changed our lives! We also used Morform sachets in the bag to help the output to thicken so that leaks weren’t so much of a concern. This is especially important if you have an ileostomy as the output will be much more liquid.

To anyone who has a child with a stoma or if you’re someone just getting used to one of your own, don’t give up if you feel hopeless trying to find the most comfortable, easy solution. It really is like the stoma nurses say, (annoyingly), “it’s whatever works for you”, and although that might seem really unhelpful at the time, it is kind of true. You will find a solution. There are so many products out there, contact companies that make stoma products and ask for every free sample going, try every paste/spray/wipe/putty/bag out there and see which one, quite literally, sticks!